Inability to open the jaw in a Chow Chow

A 5-year-old spayed female chow chow presented to the University of Tennessee Veterinary Teaching Hospital with an 8-month duration of progressive difficulty in opening the jaw. The dog was unable to eat dry or canned food, but was able to lap water and other liquids. Vaccinations were up to date and there was no history of trauma or previous illness.

The dog was thin (16 kg) with atrophy of the temporalis and masseter muscles bilaterally. The jaw could not be opened more than 0.5 cm. Palpation and manipulation of the head, jaw, and masticatory muscles did not induce obvious signs of pain. Neurological examination, including facial sensation, was normal. 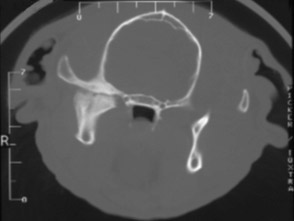 Under general anesthesia, a tracheostomy tube was placed. Using a lateral approach to the right TMJ, the condyle of the mandible and the coronoid process were removed. At the end of the procedure the jaw could be opened approximately 6 cm. Histopathology of the coronoid process showed extensive exostosis, chondroid metaplasia of the joint capsule, and fibroplasia of articular cartilage, consistent with chronic degenerative joint disease. Postoperative recovery was uncomplicated. At re-evaluation 2 weeks postoperatively the dog had gained 3 kg and was eating well, with normal ability to open the jaw.

Ankylosis of the TMJ is an uncommon cause of inability to open the jaw in dogs and cats.(1-3)  This can be secondary to trauma, neoplasia, and infection from penetrating wounds or extension of otitis media. The major clinical sign is limited ability to open the jaw. Other signs include weight loss and dehydration, and, in growing animals, facial deformity. In some cases, there is pain or swelling localized to the joint. The primary differential is masticatory muscle myositis, which can also cause inability to open the jaw and masticatory muscle atrophy. Diagnosis of TMJ ankylosis is based on radiographic findings. Plain radiographs may be helpful, but in human patients, computed tomography is considered more sensitive.(4)  Specific radiographic signs depend on the underlying cause, but the hallmark of bony ankylosis is partial to complete obliteration of the joint space. Subchondral sclerosis of the condyle, condylar flattening, and exostosis may also be evident. Treatment consists of aggressive resection of involved bone. Excision of the ipsilateral and sometimes contralateral coronoid process is usually also necessary, because of contracture of the masticatory muscles that insert in this region. Reconstruction and rigid fixation of the ramus of the mandible may be necessary in cases of extensive resection. Early mobilization and physiotherapy, such as having the patient play with a progressively larger assortment of chew toys is also helpful. With the exception of malignant tumors, the prognosis is generally excellent.(1-3,5)